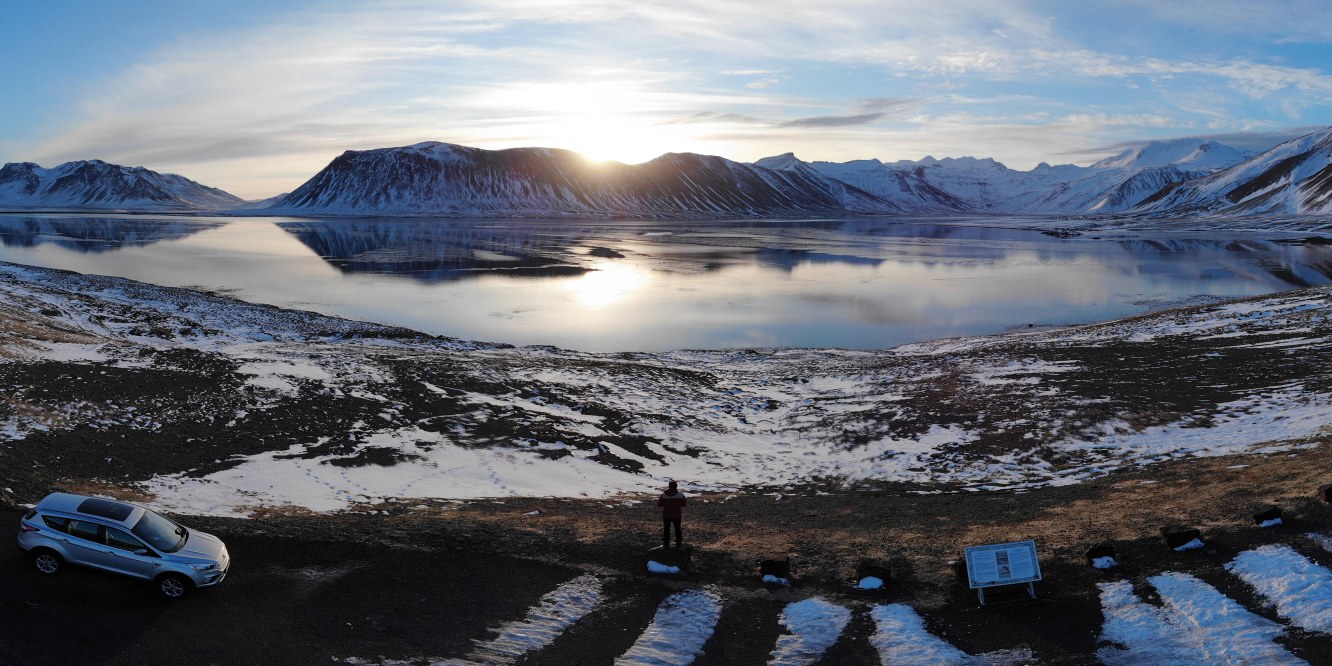 Iceland is a country I’ve wanted to visit for years now but I had always been nervous about the scale and amount of driving required.

Let’s get two things out the way immediately;

1- Iceland is expensive. Get over it.

2- The weather is changeable like you wouldn’t believe. Always check the forecast…

Before leaving I’d planned this trip extensively. I had 4 days so I really could only cram in the West and parts of the South. Now you can travel the ring road etc etc however you’d like, you could even hire a camper.. a good choice if there’s a few of you to split costs. I opted for an Air BnB just outside Reykjavik in Kópavogur, perfectly located to travel in all directions, and a bad ass 4×4 as I’d planned routes through the national park on F roads.

I arrived in Iceland and had pre booked a hire car with Geysir Car Rentals. Highly recommend them and the service was excellent. You get a little key fob which gives you a discount at OB fueling stations.. a nice touch.

Day One – The Golden Circle 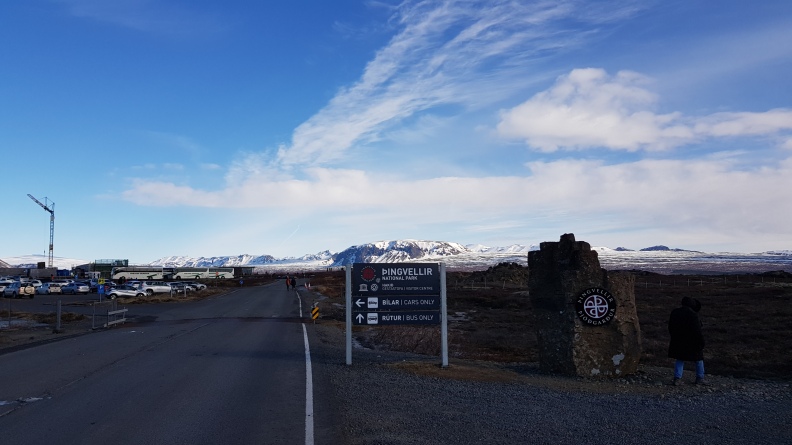 The huge lake of þingvellir was solid frozen which was quite a sight.. pretty much all the water I’d seen all morning was frozen.. including the sea. There was excellent walking routes here. I followed a couple of trails but was conscious of the time needed to complete the Golden Circle in one day. You have to pay to park here.. if you veer off to the right before this sign you can park for free… off-road parking though!

Take a look around the walking routes before heading away. They can be found here

The Geysir is pretty cool. You can’t miss it, A) because it’s packed solid with people and cars, B) the stench of sulphur is pretty heavy. Regardless of the fumes the Geysir experience is well worth your time. The eruptions from the main Geysir are pretty large, upto 70m high. This is a no drone zone over the eruptions.. I saw 2 drones fall foul to the Geysir bursts! 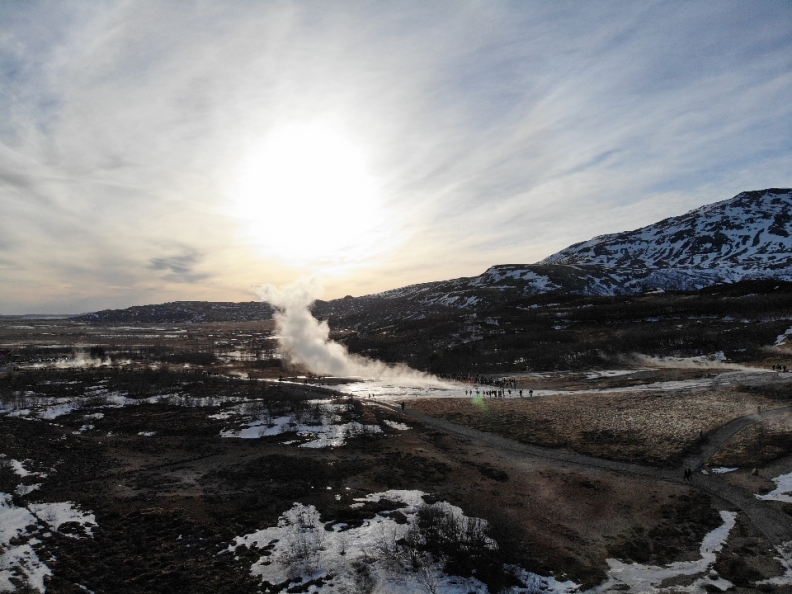 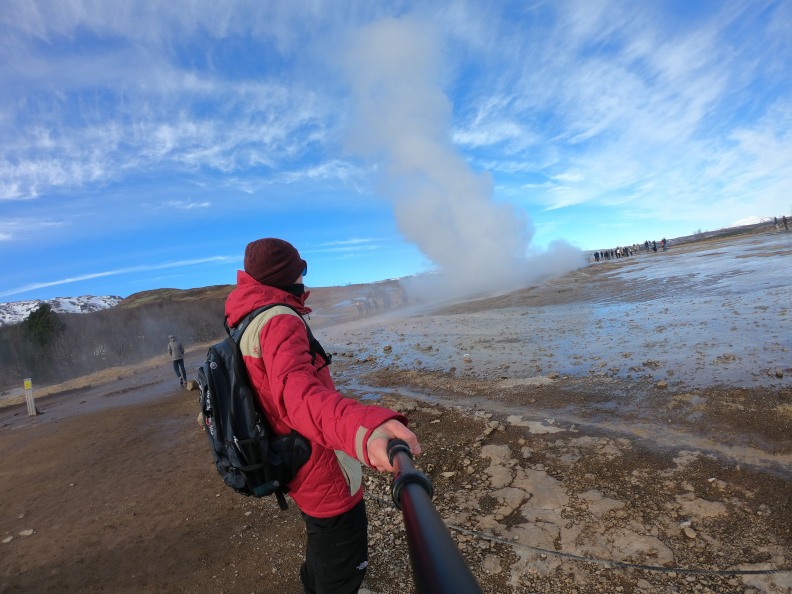 The Geysir will soak you if you’re down wind. I was drenched after an eruption.. and smelt like sulphur for a few hours..

Photo hot spot, full of camera tripods and selfie stick wizards.. yes I am one of those idiots too. Hillarious to see people being battered GoPros unsuspectingly while trying to capture the eruption..

The 32m drop looks huge, especially when the fall is partially frozen over. It was surprisingly quiet during my visit, I really guess it all depends on when the Golden Circle tour buses arrive..

This place was one of my favourites. The scenic lake occupies a volcanic crater. It is around 3000 years old! And even better, the lake was frozen and you could walk over it..

I walked around the lake looking for the best vantage point for the sunset. There was a massive ground of tripod raiders on the West flank.. I found a better spot..

The sunset from Keriđ was exceptional. I got really lucky with my timing..

After Keriđ I ended up heading back to my Air BnB in Kópavogur. If you’re doing a self drive I’d advise heading to Selfoss. There’s a few supermarket shops (and takeaways here if totally necessary!). By the time I got back to Kópavogur I was beat. I’d travelled non stop since 5am, I had a quick chat with my host and hit the hay. I had plans for a 5am start in the West..

I headed out at 5am. A 180km route was in the sat nav. Be aware when heading North/West, Route 1 has a tunnel under the Hvalfjördur. It cost me 1000ISK each way, so about £7. Worth the cost as the drive around is an additional hour.

The drive from Reykjavik to the West was awesome. I genuinely saw no cars for miles upon miles… 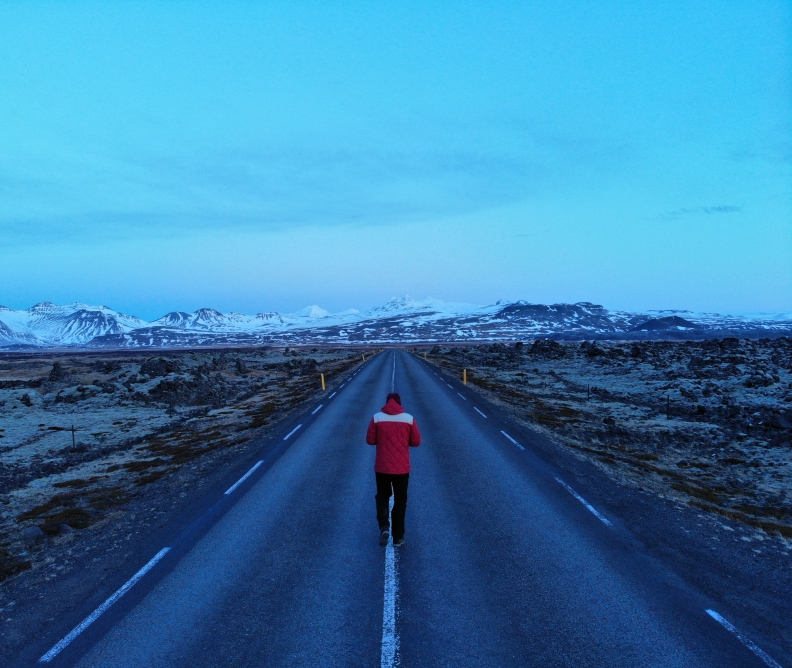 You can really see the changes in weather from region to region..

The roads after Route 54 are pretty baron, untouched and icy AF. I saw three cars on the roof tops.. All non 4×4/AWD. Again I’d advise a 4×4 if you’re headed out on a self drive. After 160km I hit Kolgrafarfjödur.. I had to stop and get some shots. It was silent, so peaceful and totally epic. 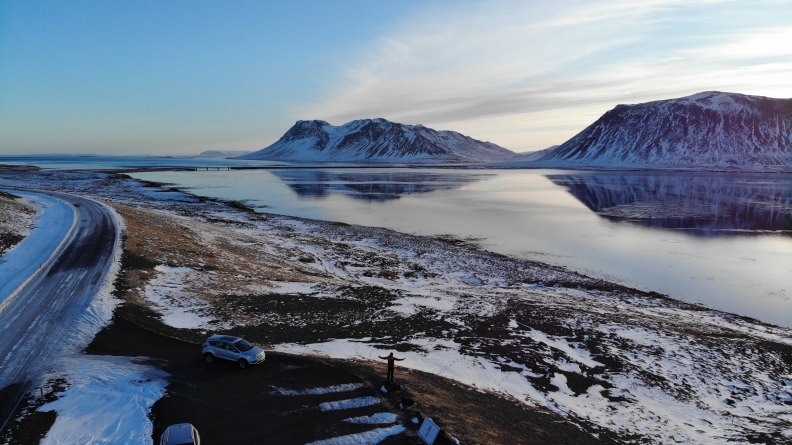 The Mavic Air was the perfect drone for Iceland 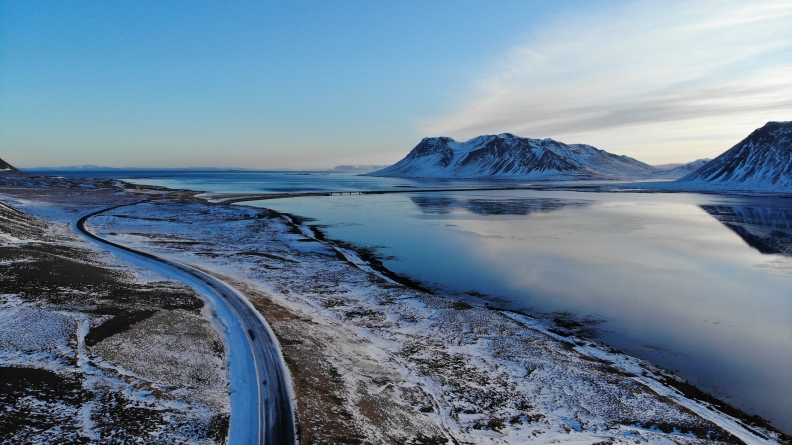 At this point, this was the highlight of my Iceland trip. I couldn’t believe how beautiful it was. I’ve been to the mountains in various countries and always get that feeling of amazement, but here it was different.. I was speechless. I sat and watched over the lake and mountains eating breakfast, the perfect spot.

Approx 20km from Kolgrafarfjödur is the immense mountain of Kirkjufell. Again a real photographer hot stop however today, 6 people were here..

Some will know Kirkjufell from Game of Thrones, it features in Seasons 6 and 7.. known as Arrowhead Mountain.

A really impressive mountain, with a stunning backdrop. Take some time to take in the mountain, there are plenty of spots to camp of picnic here. If you need supplies there is a large shop in Grundarfjödur..

This I found by accident while travelling the Snæfellskökull peninsula coastline. Head up the track about 400m, hop out the car and walk another 200m and you’ll see the waterfall.. 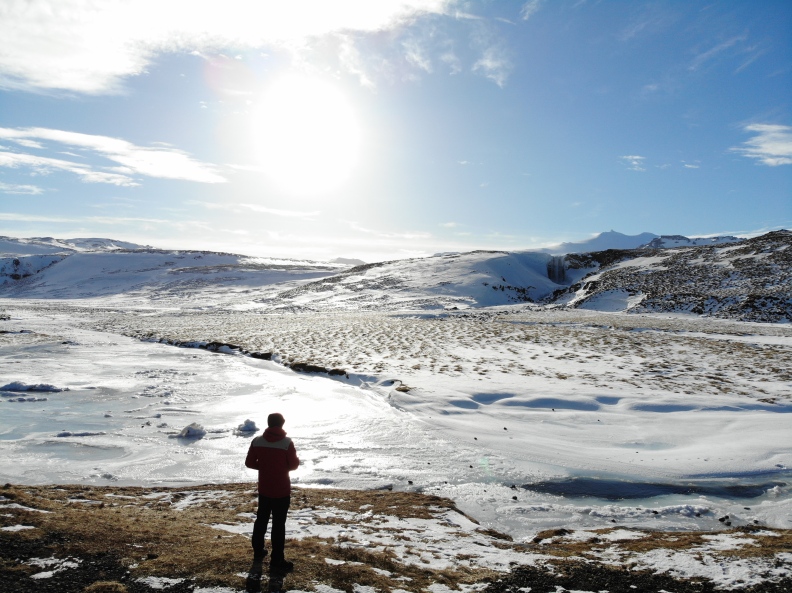 I was really taken back by this find. It wasn’t on my Maps during my planning so I was shocked to find it. It was difficult to see how close you could get to the fall as everything was snowy or frozen. I sent the drone out to see what the situation was, and capture some bangers of course. Well worth a stop off.

I continued round the coastline of Snæfellskökull. There were a couple of stop offs, there are quite a few beaches but I was unable to get down the roads due to the weather. Very gravelly roads full of ice.. I didn’t fancy a massive repair bill. Eventually I found the Malariff Lighthouse and coast line..

Londrangar is a pair of natural towers which overlook the ocean, formed by volcanic material. The walk from Malariff will take you around 20 minutes.. maybe quicker if it isn’t icy! Excellent views out to the ocean, a real peaceful spot.

After spending some time here and at Arnarstapi (a good place to get supplies for the drive home) I headed back to Reykjavik. The coastal drive along the south peninsula of Snæfellskökull is exceptional. Non stop mountains to the left and ocean to the right for miles and miles, very cool.

Hallgrimskirkja is Reykjavik’s cathedral, inspired by Icelandic traditions. It can be entered and has a 70m plus tower. Tip; a good place to park after 6pm and walk into the city centre.

I can recommend a place to eat. I had a real urge for a burger after a 18 hour day.. I found the Vitabar in downtown Reykjavik ( 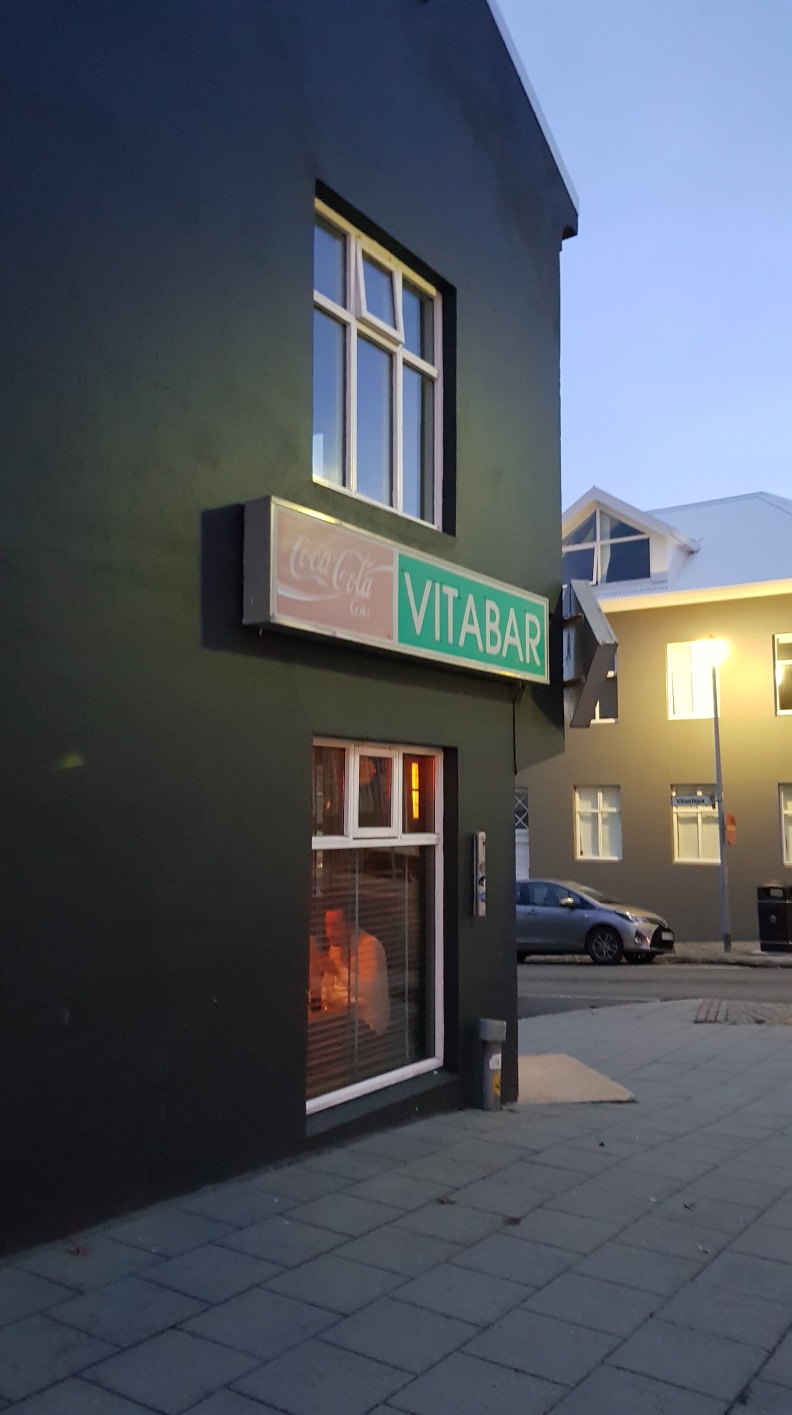 Yeah I’ll admit it looks pretty low key from the outside but the food was awesome. Prices were very good and I thought cheap (for Iceland) a huge burger and fries with a coke set me back 3000ISK so around £20. Most places this would be 4/4500ISK. Give it a try!

I’ve always wanted to visit locations on this leg of my tour so I was pretty excited when I set off from Kópavogur.. 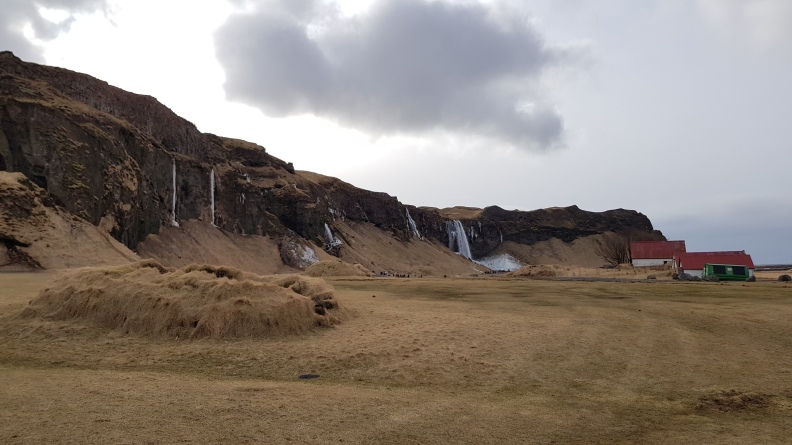 When you pull off Route 1 for Seljalandfoss you’ll see the car park full of buses. Drive past this, there is a big lay by about 300m down the road which is free..

Seljalandfoss is stunning. I’ve seen photos of it for such a long time and they do not compare to being there and seeing the waterfall in motion. In winter when the water hits the base of the waterfall it freezes and settles as snow around the base. You will get wet it you get up close..

In months without snow it is possible to go behind the waterfall.. I was disappointed I was unable to but The entrance was frozen over!

Just 24 minutes down the road is another beaut.. Skógafoss waterfall. The only difference between here and Seljalandfoss is there’s a cool staircase and viewing platform which gives off great views over the waterfall. 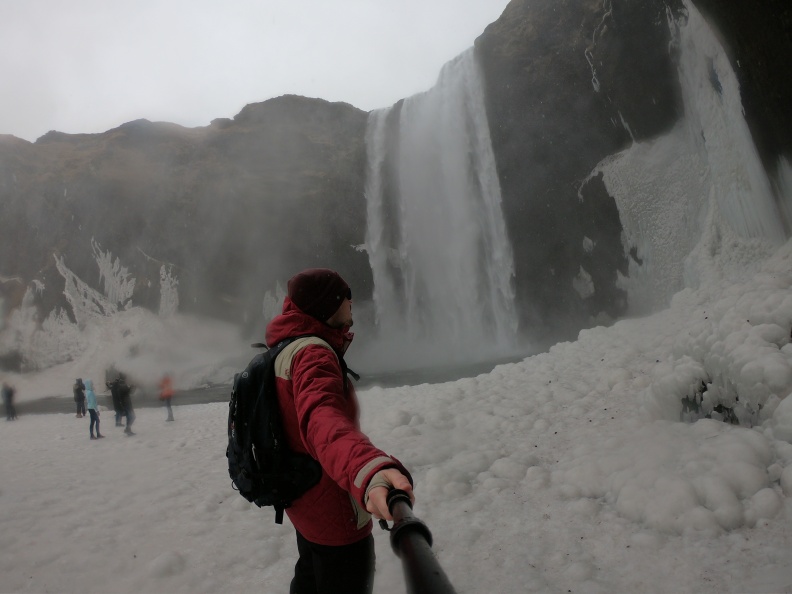 Tip; I returned here on my way home, Unfortunately my phone and gopro were completely dead, the moonlight shots you can get from the waterfall are class. I stood with a group of photographers who were shooting absolute gold!

The wreckage isn’t sign posted from what I could see.. but It is 11km from Skógafoss on the right. Now be warned, the ‘path to the DC3’ on Google doesn’t really show or tell you how far it is. I walked 30 minutes each way, in horrendous winds which were blowing people over and rain which left me soaked through.. but the end of the long walk is the wreckage. It’s pretty haunting, especially in dark wet conditions. But it’s such a cool spot.. 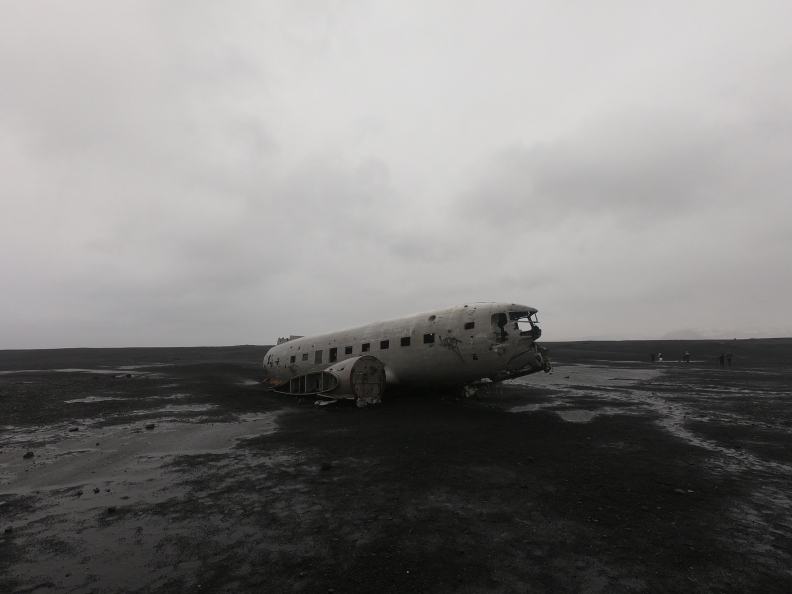 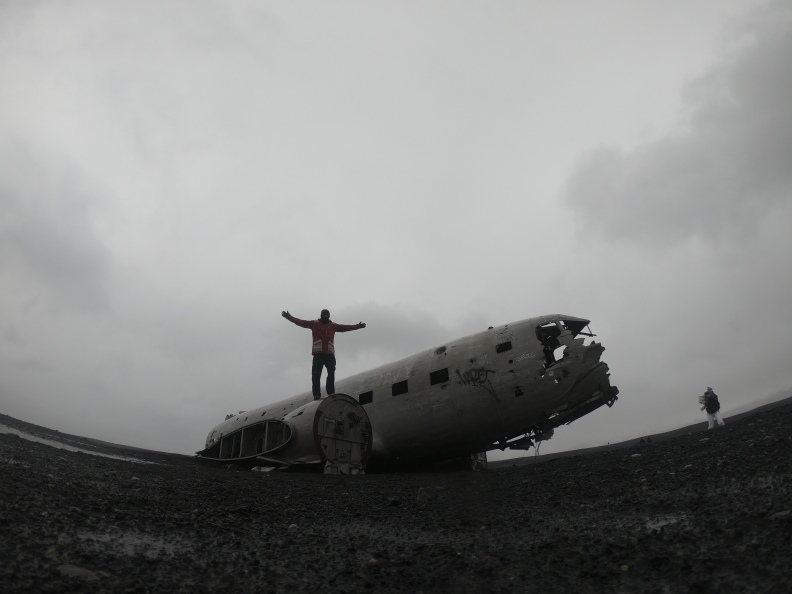 As with most spots.. this is usually busy as hell. The weather kept people away!

This felt like Mordor or something from Game of Thrones.. the black sand beach is both beautiful and haunting. I’ve never seen a beach like it but it given the conditions of the day it really looked moody AF! Beware on this coast, deadly seeker waves hammer this beach.. massive 20ft waves which pull people in from the coastline due to the tremendous power of the under current. 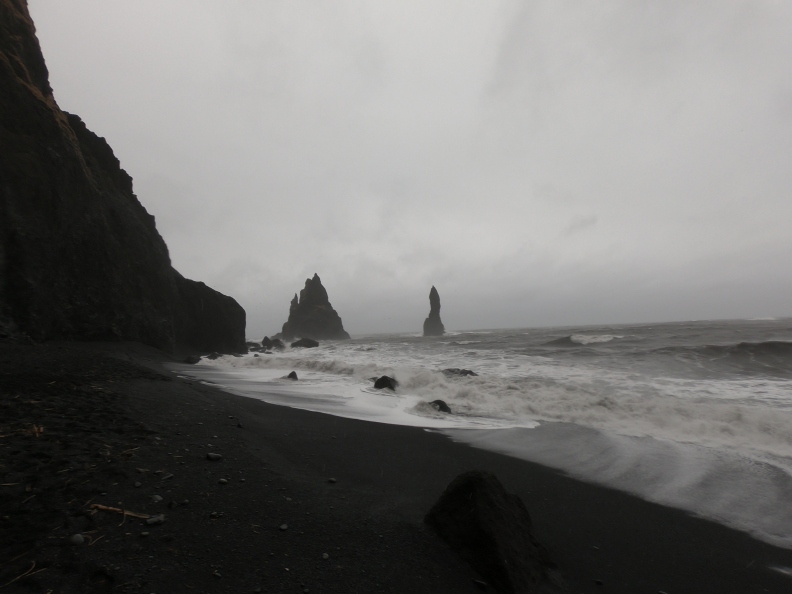 The coastline has been beaten for many years and is sculpted by the waves and winds, some of the cliff faces looking similar to the iron throne!

Key piece of advice is book your tickets. There are three levels, each more expensive.. click here for details. I opted for the Comfort entry, this is ample for me. You get use of a towel, a free silca face mask, and a free drink while in the lagoon. It cost me £70, steep yes but it’s an all day ticket.

The lagoon is awesome. A totally relaxing experience. Probably the most well known spot in Iceland, yeah it’s busy but it’s pretty big that there’s room to chill out away from others.

After 4 hours in here I left, as I was driving away I spotted some non entry thermal streams..

At this point I only had an hour before I had to be at the airport, I had one last stop.

A cool geography lesson on my.last stop. This bridge connects the Eurasian and North American tectonic plates. Before the breaking of Pangaea this would have been connected.

And that was it. My Icelandic adventure was over. I had the most epic experience and I was definitely return.. I only saw a tiny bit of Northern lights and it was quite disappointing that I didn’t see the green dance.

•Pretty much everywhere will accept credit or debit cards

•Book the Blue Lagoon before you travel

•Always carry water on journeys, dehydration is not joke, as I found out.

•Pick up a 12V DC car inverter. This will also you to change things like a laptop or drone.

•Also pick up a phone holder as you’ll need it for GPS.

Thanks to my Air BnB host, Floris and thanks Iceland, you’ve been incredible.

Shots taken on my GoPro Hero 6